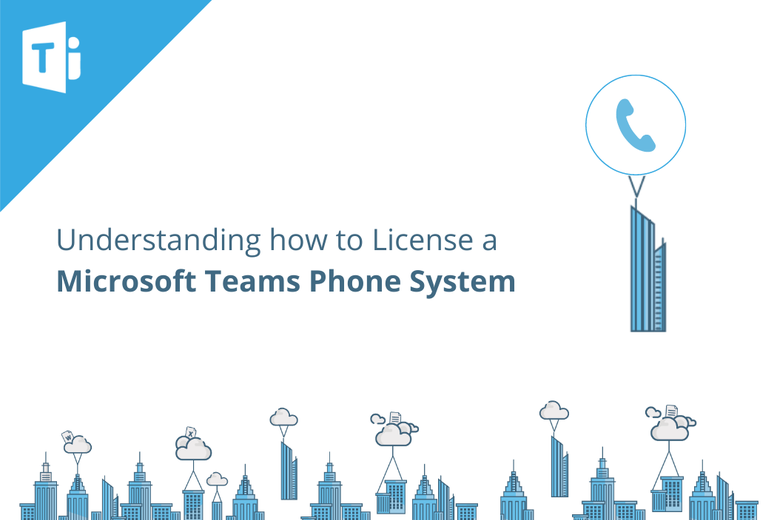 Understanding How to License a Microsoft Teams Telephone System

This week, we’ll be returning to Microsoft Teams Calling. I’ll be giving an overview of exactly what licencing and package options are needed to give you access to the Teams Calling platform. We’ll also touch on what specific calling elements each of the key Microsoft 365 licences provide.

To use Teams Calling you need to have the three main elements:

The Microsoft Phone System Licence provides all the standard PBX features and functionality that you would normally associate with a traditional on-premise or hosted voice system. We’ve covered this before, but here’s a reminder of what’s included:

The Phone System licence doesn’t include your physical calling access or the ability to make and receive external calls. This is where the Calling Access plan comes in…

The Calling Access can be provided in two ways: either through Microsoft (giving you a single provider for all elements) or via a third-party SIP provider. In this overview we will be focusing on the Microsoft direct route.

With both above elements in place for each user, you then have the basis for Teams to become a full replacement for your existing hosted VOIP or on-premise phone system.

So, how do you get the above licences, and do you have them already?

This is probably the most straight forward piece of this whole topic. If you have Microsoft E5 Enterprise licence or the A5 Academic licence and delve into the list of included features, you’ll see that the Phone System licence is already included as standard. That means that “essentially” all you need is a calling plan and you can start using Teams as a calling platform. It is important to note that each user that needs to make external calls will need a calling plan (receiving calls however does not require a calling plan).

All other current Office/Microsoft 365 licences (Business Premium, Essentials, E3, A3 etc) do not include any element of the Microsoft Teams Calling platform (with the exception of the Teams application of course).

Microsoft offers standalone calling packages to fit a variety of user options, built for those who make occasional calls and those who use the phone regularly. The two main plans are…

Licensed users can call out to numbers located in the country/region where they are assigned in Microsoft 365 or Office 365.

Licensed users can call out to numbers located in the country/region where their Microsoft 365 or Office 365 license is assigned based on the user's location, and to international numbers in 196 countries/regions.

The above plans are available in both 120- and 1200-minute user bundles.

As a point of reference, all users in the same country/region (this is the user country location defined in the licensing area of the Microsoft 365 admin centre) with the same Calling Plan share a pool of minutes. For example, if you have 100 users located in the same country/region with a 120 minutes Domestic Calling Plan assigned, they share a pool of 12,000 minutes. All calls exceeding these minutes are billed per minute.

For those with anything but E5 and A5, Microsoft have tried to make things as simple as possible by creating the “Business Voice Package”.

Business Voice (designed for Office 365 tenants with up to 300 users) provides the following elements in one licence:

This gives the client all the required elements to create a fully featured phone system and calling platform using Teams.

Microsoft 365 Business Voice is available with the following subscriptions with up to 300 licenses:

For companies with more than 300 users, the E5 licence is required with one of the Microsoft calling plans mentioned earlier.

Circle Cloud are hosting a free webinar on Thursday June 24th (15:00-16:00). If you would like a technical overview of Microsoft Teams as a phone system, Click Here to register.

Our Next Teams Event

Click here to see our next Microsoft Teams Event